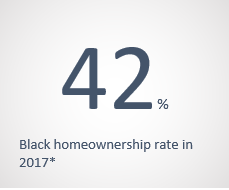 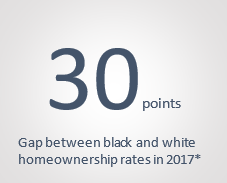 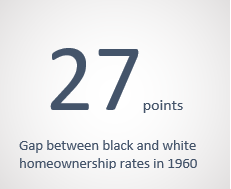 The gap in the homeownership rate between black and white families in the US is bigger today than it was when it was legal to refuse to sell someone a home because of the color of their skin.

The gains made in the three decades after the 1968 Fair Housing Act were erased after 2000, as forces within and beyond the housing market aligned to reduce the black homeownership rate.

The black community was hit harder than other racial groups by the housing crisis. Black homebuyers bought homes at the peak of the bubble at higher rates than white and Asian homebuyers and were disproportionately the victims of predators who offered subprime loans even to those who qualified for prime loans. Existing black homeowners were also aggressively solicited for unsafe refinance products that stripped equity and ultimately fueled foreclosure crisis.

On average, black families did not benefit as much as white families from the economic recovery since the housing market crashed in 2008. As a result, the black homeownership rate dropped more than 2 percentage points from 2000 to 2010 and slid another 5 percentage points after 2010.

The decline in black homeownership threatens to exacerbate racial inequality for decades to come. Homeownership remains the principal way most families build wealth in this country.

Changing the course of this entrenched problem will require intentional policymaking, an evidentiary foundation, and effective partnerships at the national and local level between the many stakeholders in the housing ecosystem.

And closing the black-white homeownership gap is a critical indicator of whether we are on course to be a fair, just society with equal access to opportunity for all.

Disentangling the racial homeownership gap will require changes across the entire housing ecosystem to address entrenched structural barriers. Fair housing, fair lending and the growing role that technological innovation will play in addressing the gaps are important areas for continued data analysis and focus.

Our five-point framework for reducing the black homeownership gap examines many of the systemic barriers and specific policy actions that have created the gap. Reforms are needed across the housing spectrum to ensure that millions of credit-worthy black renters can gain access to stable, affordable, and safe homeownership.’