Features
RSS
Interactives, stories, and collections that go beyond the data

In many cities, low-income residents live far from available jobs, and employers can’t find people to fill open positions. Economists call this “spatial mismatch”—a mismatch between where jobs are located and where job seekers live, which can cause high unemployment rates and lead to longer spells of joblessness.

Data from Snag, the largest online marketplace for hourly jobs, show us that this is true for job seekers who use their platform. Snag data capture a large number of low-wage job seekers in each metropolitan statistical area (MSA). Across all the MSAs in our sample, Snag data represent 13 percent of all new hires in 2017, as measured by the Quarterly Workforce Indicators, a longitudinal dataset of economic indicators from the US Census Bureau.

Snag data give us a unique view of the labor force because they reflect hourly, often minimum-wage jobs, which can’t always be found in traditional jobs data. The jobs are predominantly full time, and most are restaurant, retail, and customer service positions. The applicants in the system generally have only a high school diploma and are evenly split by gender. Unlike traditional job datasets, these data include all job postings and all applicants (rather than only matched jobs) and are available at the zip code level.

Looking at 2017, the most recent year of data, we analyzed the distance between every job seeker and the jobs they applied for, allowing us to map out spatial mismatch. And we talked to local government and workforce officials in two regions to learn what they’re doing to overcome this problem.

What spatial mismatch looks like in San Francisco and in Columbus

To map out spatial mismatch, we looked at the San Francisco Bay Area in California and the Columbus region in Ohio.

In 2017, most zip codes in the Bay Area had an overabundance of Snag jobs and an undersupply of Snag job seekers within a reasonable radius of those jobs, perhaps because high housing costs keep low-wage earners from living in the city. The map below shows that San Francisco Bay Area employers who use Snag do not have enough job seekers who live within a reasonable distance of their jobs in most neighborhoods (represented in pink). 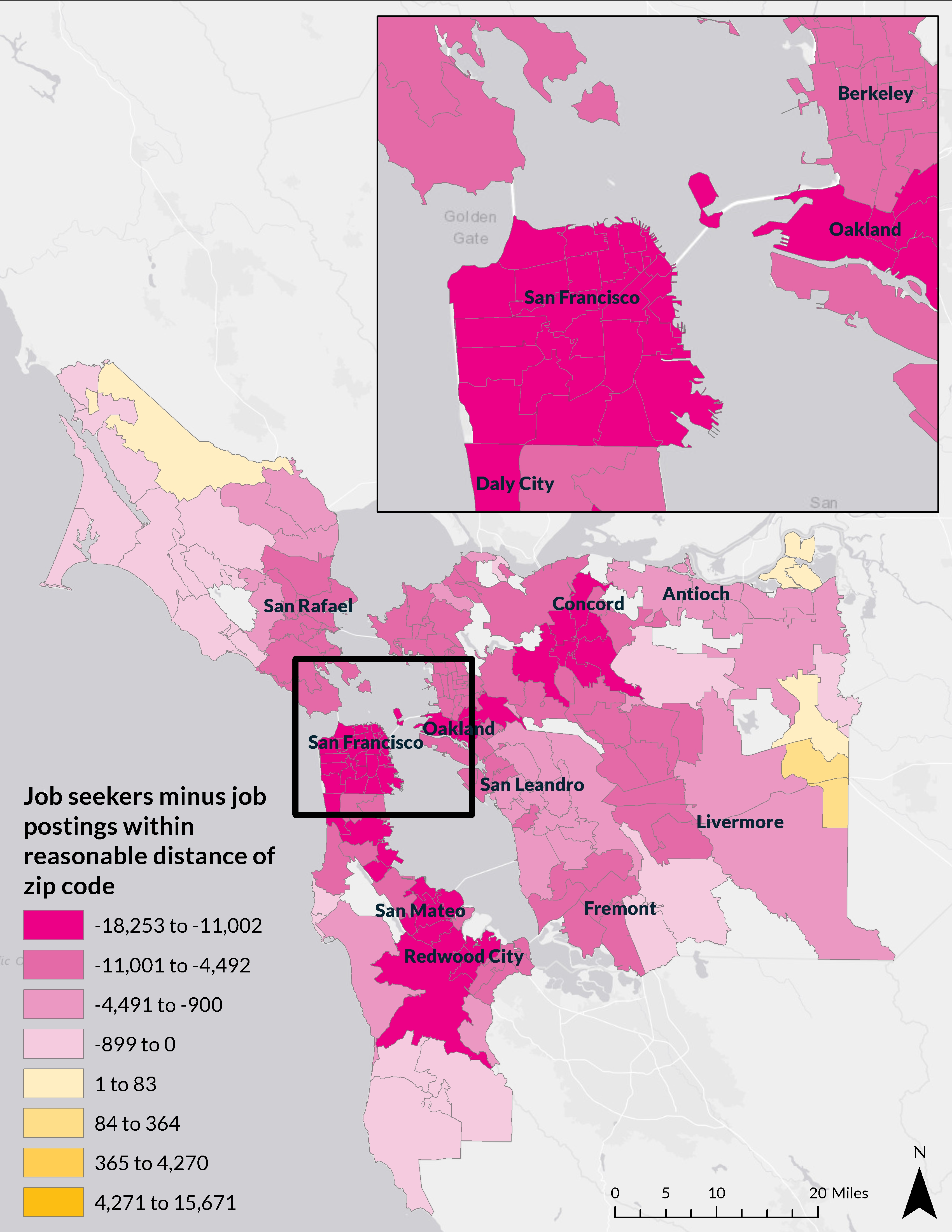 In the comparatively less populated region around Columbus, Ohio, a different story emerges. Like the Bay Area, the Columbus region has areas with an overabundance of Snag jobs and an undersupply of Snag applicants within a reasonable radius of those jobs (represented in dark pink). But Columbus also has pockets where job seekers outnumber job postings within a reasonable distance from their homes (represented in gold).

Snag data, however, contain mostly retail and service industry jobs and may undercount industrial and logistical distribution jobs, which are prevalent in Columbus.

“There’s this perception that all the jobs are in the suburbs,” said Steve Schoeny, director of Columbus’s Department of Development. “In reality, there are just as many jobs, or more, in the central core city. And so it’s about how do you connect people to those jobs within the core city, rather than how do we continue this pattern of sprawl?” 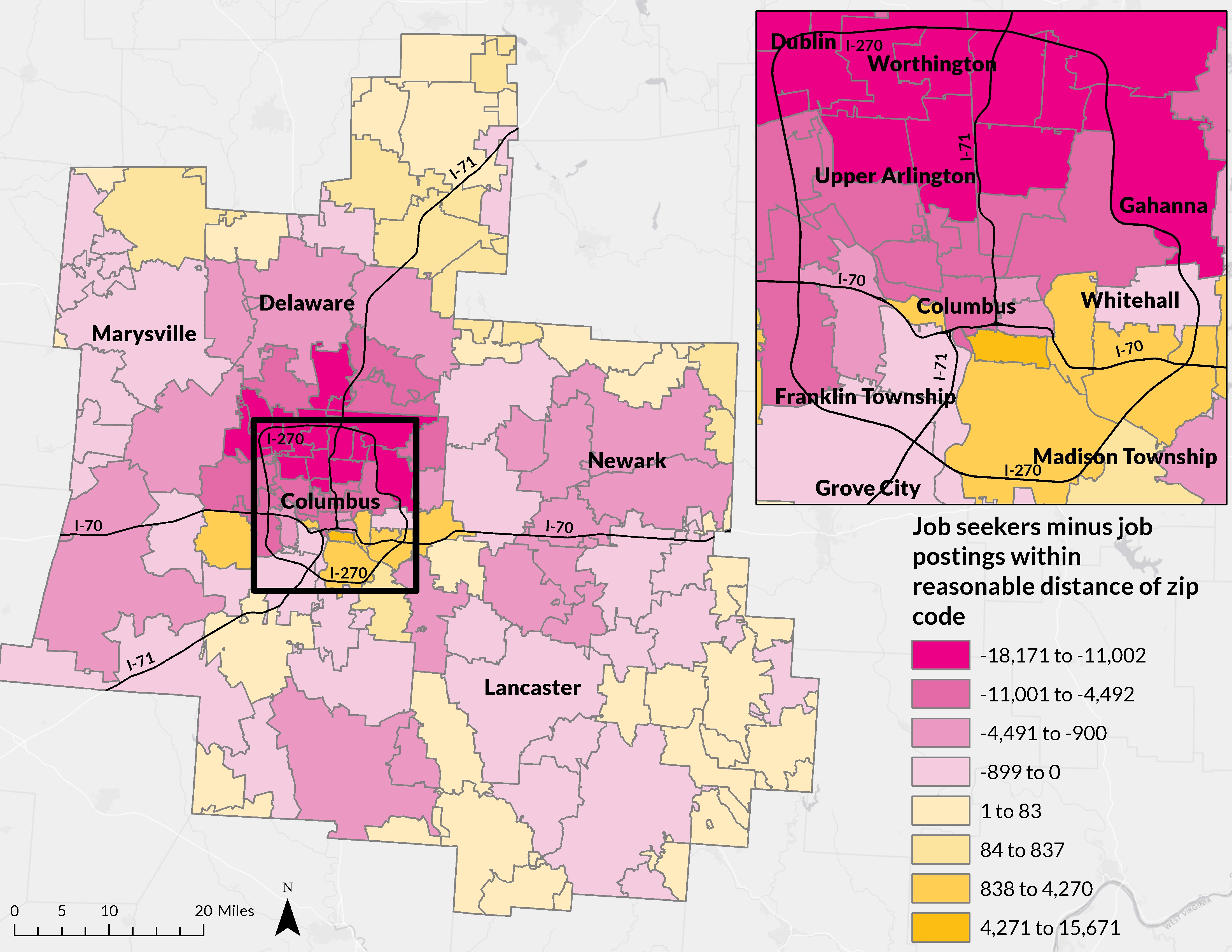 Job Postings and Job Seekers in the Columbus Region, 2017

Spatial Mismatch (Applicants Minus Postings) in 2017 across 16 MSAs

What cities are doing to overcome spatial mismatch

To resolve spatial mismatch, some cities and regions have found ways to connect low-wage workers with good jobs. Successful strategies may decrease the distance between job seekers and employers or improve the quality of jobs so that job seekers are willing to commute longer distances to get to them.

This feature was funded by the Urban Institute’s Fleishman Innovation Fund. We are grateful to all our funders, who make it possible for Urban to advance its mission.

Data for this analysis come from Snag and consist of each job seeker, job posting, and job application for every entry in its system for 16 metropolitan areas for the years 2013–17.

To calculate spatial mismatch, we first draw a buffer around each zip code’s population-weighted centroid of 6.3 miles, the average distance between each job seeker and job posting for all applicants in our data. We then sum all job postings in that buffer in each year and subtract from that all job seekers in that buffer in each year. The larger this number, the greater the employer spatial mismatch; the smaller the number, the greater the job seeker spatial mismatch. We calculate the population-weighted centroid for each zip code by taking population counts from the American Community Survey at the census block group level and geospatially calculating the mean center of each zip code weighted by the distribution of population by census block group.

As an organization, the Urban Institute does not take positions on issues. Experts are independent and empowered to share their evidence-based views and recommendations shaped by research.